POV stands for “Point of view,” and is used to designate that the audience will see something from a specific angle or through a particular character’s eyes. It allows the reader/audience to understand how a character perceives or approaches a situation. The POV of a character is usually conveyed with a description of what the character is seeing and experience through dialogue and action.

EXAMPLES:
You can write a scene with identical dialogue, but with a different point of view—in other words, by adding a description, you reveal the character’s mood, heart/emotion.

Do you see the difference? How does example # 2 bring the character’s POV to life?

In the second example, we are not just seeing Maggie glare/stare at something. There is obvious shock and anger, which could easily be revealed with body language, and in the way the character responds emotionally.

From this POV, the audience is going to see something from Maggie’s eyes.

Maggie hovers outside a room eavesdropping on a conversation. We want her outside the door overhearing “something…” If you’re writing from the POV from a person inside the room, you would need to start the scene inside the room, and then have Maggie enter.

POV Character is the focal point of the particular scene. Typically, it’s a good idea that it be the character with the most to lose, or the higher stakes to play.

The pub is dim, and Mark sits in the corner at the bar next to a drunken businessman watching Shelly and a BIKER—a heavily tattooed, drunk, obnoxious guy in his late 30’s, lean over a pool table bickering about the rules of the game.

The audience is yet to discover that Mark is a pool shark, and he’s about to give these two a fast course in pool playing. Naturally, this will invoke conflict, because the Biker is into Shelly.

The camera is going to film that little scene from Marks POV. If it were from the Biker’s POV, Mark wouldn’t even be in the equation. We would only see the tension building between Shelly and the Biker.

This is part of the beauty of writing from a POV.  If the camera just dropped into the middle of this scene, not focusing on anyone’s perspective, the dramatic tension would not be nearly as strong when Mark confronts the Biker and starts to show them how it’s done.  Think about it…because this scene will be shot from Marks POV, it will give way to rising action and allow for greater conflict in the story.

We all have a point of view, right? This is part of human nature. That does not necessarily mean it’s correct, but it’s our POV. It’s the world as YOU see it.

Mark knows how to play pool, and he knows it well, so the way he views the scene between Shelly and the Biker is going to be very different from the way the guy sitting next to him at the bar does. The drunken businessman who is sitting next to him could care less about pool.

Charlie Rose [to Streep]: If you have someone so pronounced in size and personality, in voice — distinct and different, easier to do, or harder to do? What were you trying to capture when you played her?

Meryl Streep: The outlines [of her character] were very familiar to people —
I knew that, and to me too, but in a way Danny Ackyrod’s version was even more vivid in our minds, and so it was already kind of already caricatured in your head. I wanted to look at her in the idealized way that Julie did, because this is Julie’s *imagined* Julia. [Emphasis in Streep’s own voice.] In her head, [Julie] imagines this gal in Paris with her husband. And I think because it’s in this roseate hue, I just wanted to make it as real as it could possibly be, but I didn’t feel that I really had to adhere to every piece of research I’d done on Julia. I just wanted to make a human being that lived.

Ephron: There’s no question that the Julia we show in the movie was Julie Powell’s idea [of her].

Streep: You never really know the ins and outs of a personality…but to imagine that you know the inner life and conflicts and anxieties of a public person, it’s very very difficult, but it’s endlessly interesting. [end]

So, I do think Julie & Julia is largely written from Julie’s POV. 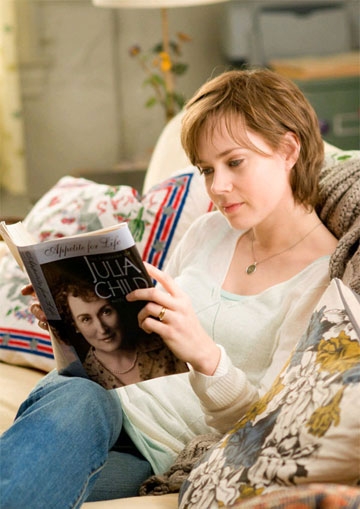 “A movie, I think, is really only four or five moments between two people; the rest of it exists to give those moments their impact and resonance. The script exists for that. Everything does.” – Robert Towne

I recently had someone ask me, “What the heck is a plot point?” Essentially, the plot is the driving force of your screenplay, so it’s sufficient to say, the plot is vital.  In fact, Aristotle believed it to be everything.

You can create the most interesting character in the world, but without an equally interesting plot, the audience will not want to spend 90-120 minutes with that person.  Also, here’s a NEWSFLASH… ALL MOVIES HAVE THE SAME STRUCTURE!  It’s only the rare exception that steps away from this.  In the same way an architect draws up a blueprint for a building, you too must plot your screenplay accordingly, and you’re not going to get away from structure.  It’s that simple.

Here’s the way basic film structure breaks down.  There are EIGHT sequences–two in Act One, four in Act Two, and two in Act Three.  Within this structure, there are five major plot points, which are the building blocks behind good sequence crafting.  These plot points are:  Inciting incident, Lock-in, Midpoint, Main Culmination and the Third Act Twist.

No matter the story or its genre, each one has 8 plot points that you have to follow.  And once you know these 8 plot points, writing a script outline and a full screenplay becomes infinitely easier because it’s no longer you vs 110 blank pages. You’re writing towards a goal instead of just randomly going at it, without a building block or blueprint.

It’s very important that you have a good understanding of what these plot points mean, because they will be the foundation for your script outline.

I also came across this, and feel it’s worth sharing.  World famous screenwriter Syd Field talks about the writing structure, and gives exercises for practicing writing dramatic structure!  Here’s the link:  http://www.sydfield.com/featured_theparadigmworksheet.htm